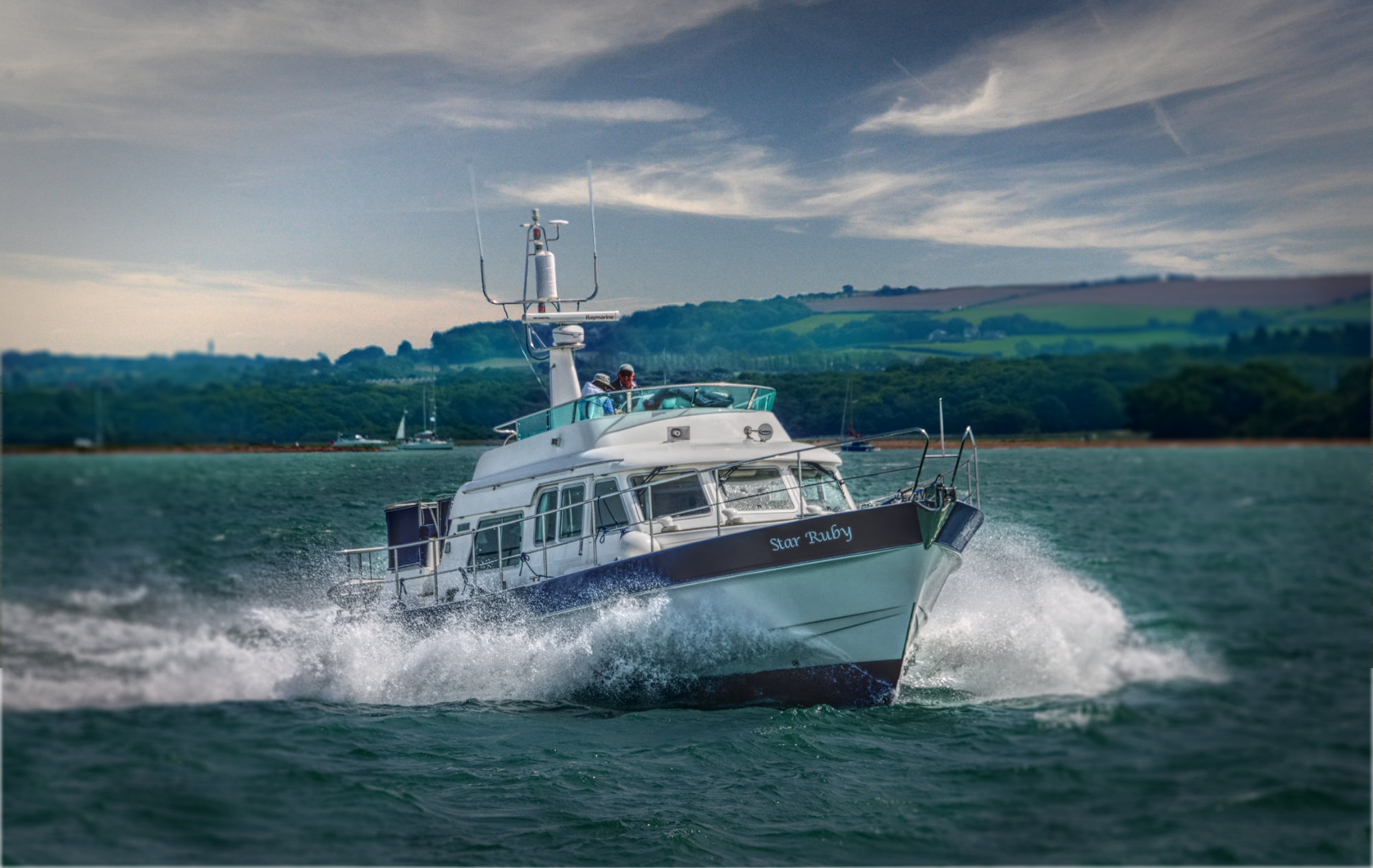 After dropping David Barker off at the station, I returned to Marchwood. where we had a lazy morning before departing at 1300. The tide was with us in the W Solent, so at only 1300 rpm we were still making 10 kts over the ground (SOG).

The 8th was spent quietly ( my birthday), and similarly for the 9th. On the 10th, we trickled over to Lyington where we collected John and Mary Miller from the Royal Lymington pontoon (they are members there). By  midday we were back on the buoy at Newtown setlling down for an excellent lunch which Mary had provided/

The weather was fine, but a brisk N/NW wind stopped it from getting very warm. Newtown was very busy, so when another Hardy ( a 42 called Star Ruby) came into the creek, all the buoys were occupied so we invited them to raft alongside. This had the advantage that when we returned John and Mary to Lymington in the ate afternoon, the buoy would effectively be reserved for us! That evening we exchanged visits. Star Ruby is a whole league more luxurious than Teal, but I would guess that the fuel burn is doubled. Joss and Shirley  made us most welcome.

On the 10th,  Star Ruby decided to go to Lymingon to  pick up friends. We opted to go to Keyhaven. We left first shortly after lunch, so were able to get into position to get some photos of Star Ruby under way. It turned out to be a good photoshoot. To see the album, click here

Keyhaven is a quiet relaxing place, even on a busy Solent week, so we were nt surprised to find an empty buoy. It was interesting to ssee Oriana exting the Solent via the Needles Channel. fewer cruise ships do so these days, partially because they have got bigger, but also because the channel shifted some years ago at the Bridge and developed a bit of a chicane there.

The weather improved on the 12th, so we left Keyhaven at 1030 in sunshine and with a light SW breeze. With the tide unnder us we touched 11kts SOG with only 1100 rpm. As we had plenty of time we anchored off Leoe for lunch. At 1530 we weighed anchor and went fast to Fawley (to blow the turbos through!). As usual we spent the evening on our mooring before unloading the next morning.

About the Author: Graham Rabbitts

Trained as Naval Architect. Involved in shipbuilding and shipyard construction/ Worked briefly in aviation. Joined Associated British Ports in 1984 as Business Development Manager. For 10 years until retirement in 2001, Environment Manager at ABP. Has owned several yachts described on this website