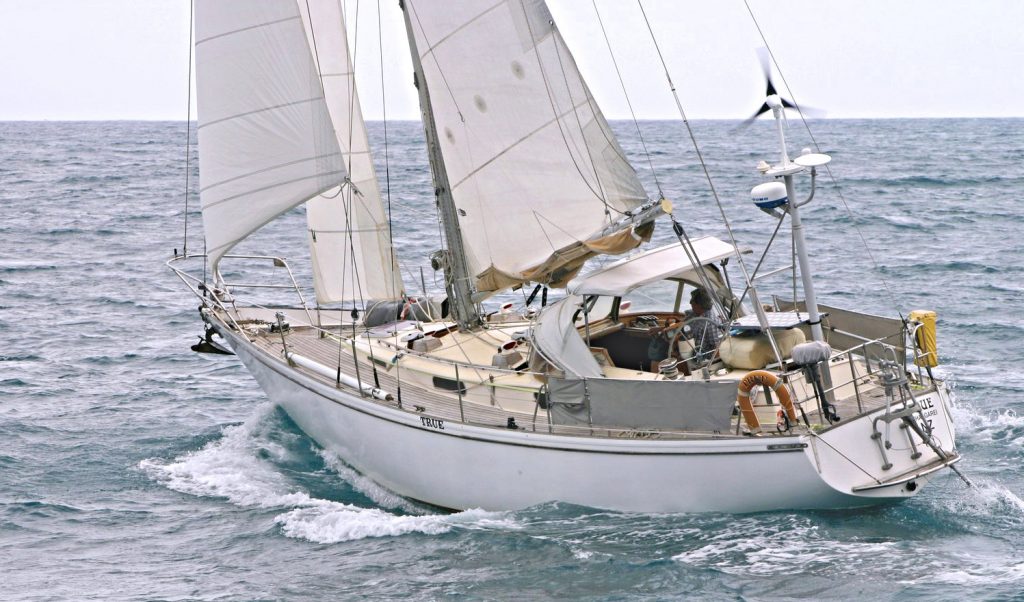 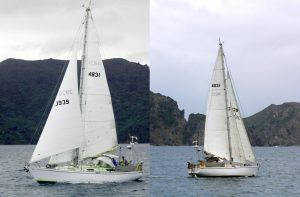 True is cutter rigged, with a furling Yankee and self-tacking staysail. The mainsail is cut with the boom angled up from a gooseneck almost at deck level. This means there is no kicker, but there are two vangs that sort of act as a kicker and gybe preventer. The reasoning for this is related to tradewind sailing – the boom end will not get to the water when you roll. We are getting used to it. There is a separate track on the mast for a trysail. 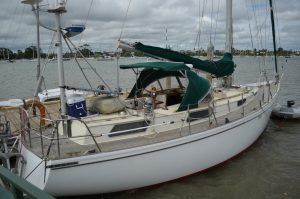 The cockpit does not feel like a centre cockpit perched on top of the boat. It is deep, rather small, and sheltered by a fixed screen, hood and Bimini, giving essential protection from the strong UV experienced in NZ.

One of the twin backstays is insulated as an aerial for the SSB radio. The small aerial mast aft carries radar, a wind generator, 2 gps aerial and supports a solar panel over the liferaft. The deck and coachroof construction is glass over ply. It is in amazingly good condition. There is a swimming platform aft, slightly obstructed by the Aries windvane gear. 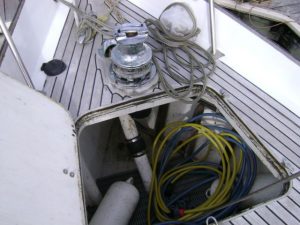 Aft and forward there are huge deck lockers for stowing dinghies,beach gear, anchors and fenders. There is a powerful electric anchor winch. The 4 sheet and 2 halyard winches are powerful and in good condition.

The standing rigging was replaced in 2014 and the opportunity was taken to modernise the mast electrics. 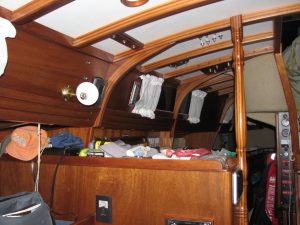 The chain locker is open to the f’cle, which contains 2 berths in a vee (adequate for the children for a year or two more). 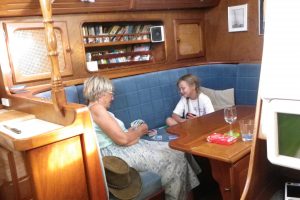 Moving aft, there is an elegant shower room with extractor fan. The loo has been modified to include a nominal holding tank to comply with NZ regulations Opposite the shower space is an immense storage area with wardrobe, cupboards, drawers and plenty of shelf space, The TV has been removed. The main saloon has a centre table, with benches each side. On one side there is a pilot berth behind the benches, and on the other, immense cupboard space. There is plenty of underbunk storage. All locker lids and doors have retainers against the risk of opening in bad weather. 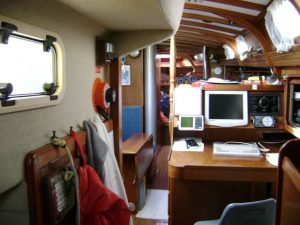 Moving further aft, there is a navigation station of some complexity to stbd, and the galley to port. The galley has pressurised hot water, hand pumped cold fresh and seawater. A large stove, and a large freezer with a seawater heat exchanger making it efficient. There is another fridge in the alley to the aft cabin, but it is less efficient. 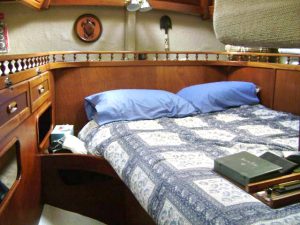 The aft Cabin contains a double bunk and lots of storage.

The hull is solid grp, and has been epoxy painted. It is in generally good condition. Teak decks have recently been removed and replaced with painted glass over ply, The coachroof is glass over ply, a form of construction common in New Zealand. It seems to be in good condition with no evidence of water ingress. The rudder is fully skegged. 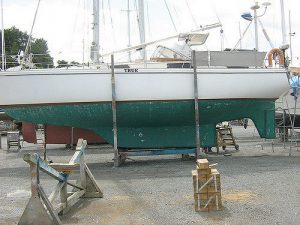 The engine is a 50hp Isuzu driving a fixed propeller (which has replaced the Kiwiprop) on the centreline. The engine is under the cockpit but is accessible from front and one side. The whole of the area under the saloon sole and the fin keel form the 700 litre fuel tank (almost enough to motor to Fiji!). There is 150 litre ‘day tank’ with a transfer pump from the main fuel tanks. 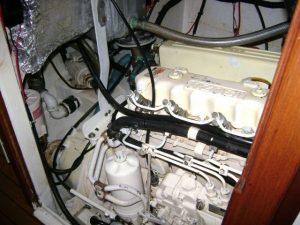 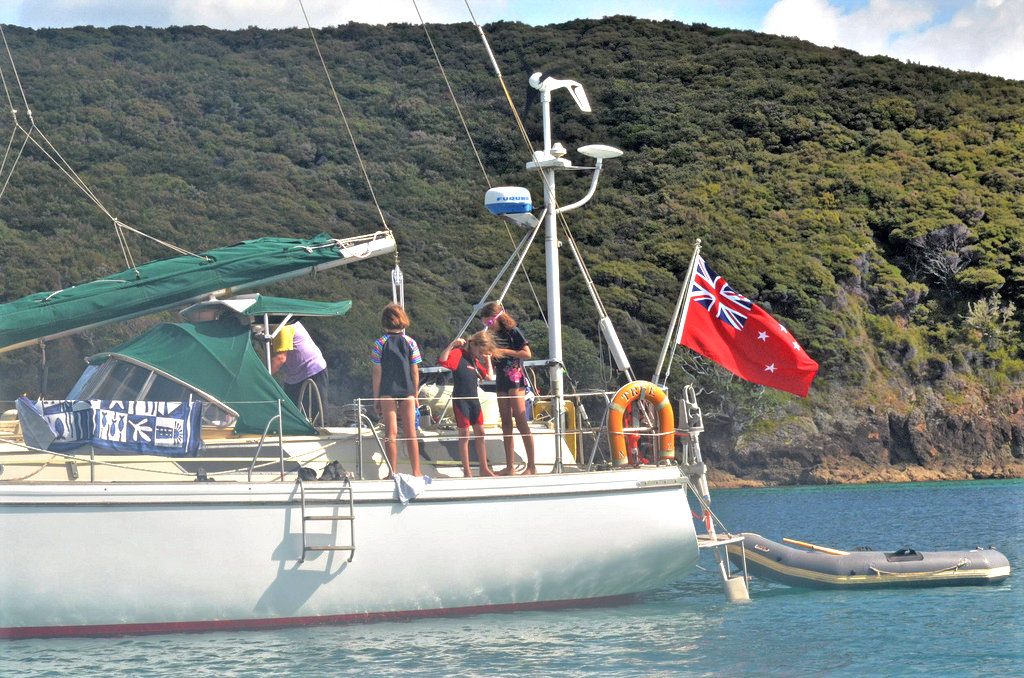 In addition to the usual alternator, which usually charges the starter battery, there is a high capacity alternator that only cuts in over 1000rpm charging the main batteries (4x 120Ah), giving typically 40amp at 1800rpm. Power is also provided by the Air-Breeze wind generator (with the on/off switch by the bed in the aft cabin, so it can be turned off at night); and from a solar panel,which has recently been replaced. There are plenty of ammeters and switches so the system can be managed.

At the Nav station there are VHF and SSB radios; an old autopilot with a large control panel. It works well, but cannot be controlled from the cockpit, and is high up the list of items to be replaced.

There is a Furuno radar, and an independent GPS. Nav data such as SOG, COG, speed and windspeed are fed from the Simrad instruments  and the GPS to the radar display; then on to a laptop  at the navstation. We use Australian SOB software . 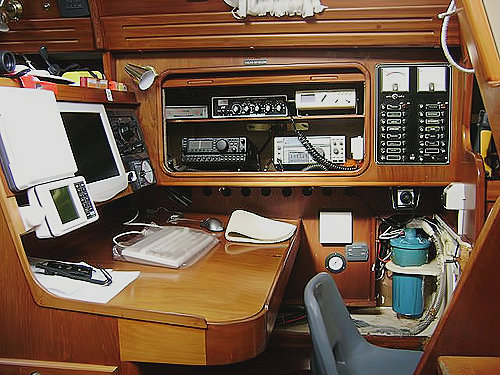 Unfortunately, the compass for the autopilot does not have an NMEA output, so heading data is missing.  The navigation system uses C-Map MaxPro. The photo above was taken when True was bought. Iain and Clare have already made substantial changes, and the process is ongoing.

There is a completely independent Navman plotter by the ships wheel in front of the helmsman. This uses C-Map NT cartridges. 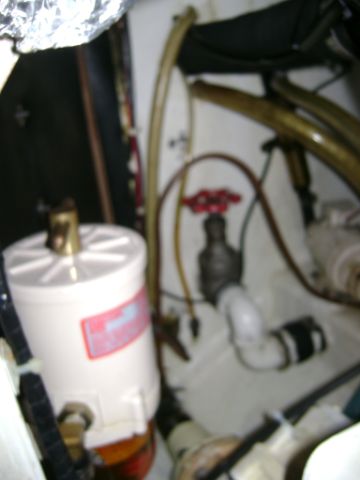 One of 2 water filters

There are three water tanks, one to each side of the saloon, and one aft. There are interconnecting pipes and valves to enable water management. Interestingly, the tanks are filled from deck scuppers. The deck drains overside till the salt and dirt have been washed off. Then Y-valves on each side are switched over so that water drains from the deck via large filters into the port and stbd tanks. (I switched the valves over at 0730 at Great Barrier when we had APD rain, and the tanks were full before 0900). This arrangement is useful because getting good quality water can be tricky in NZ once clear of Auckland. The total water capacity is about 750 litres.