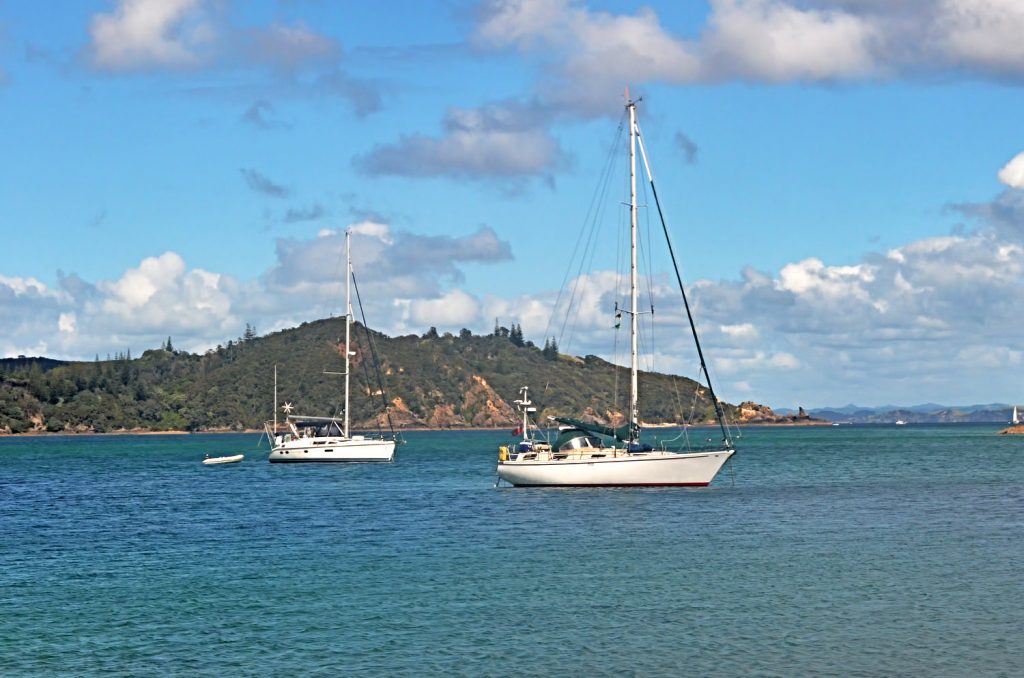 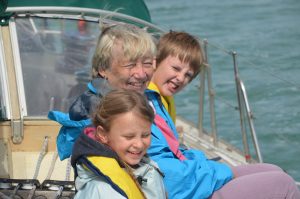 At the end of November 2011, Dairne and I flew to New Zealand, again using the Cathay Pacific Business Class over Hong Kong. After  a  few local trips and some weekends on True with the family, Dairne and I visited Coromandel for a few days. 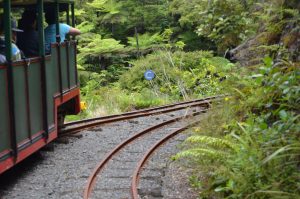 Our key places were Driving Creek Railway.  Hot Water Bay where the Pohutakawa trees were coming into full bloom, Whangapoua, and Whitianga, 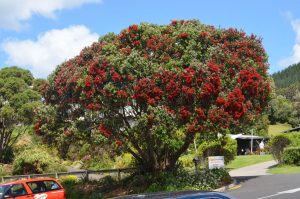 We had a day with Harry and Alice at the  Glenbrook steam railway, which we all enjoyed. 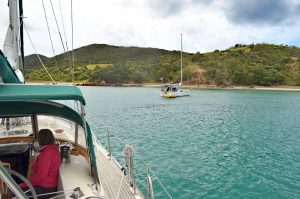 Although Iain was still working, Clare, Harry and Alice came with Dairne and me to sail Teal up to the Bay of Islands, where Iain joined us for Christmas, which we spent in Paradise Bay. On Boxing Day we sailed further north to Whangaroa where we spent a few days, duing which we met Dick Orchard who had built True.

After New Year we all sailed south to Auckland with stops at Tutukaka and Kawau. There was one more weekend sailing together before Dairne and I returned to UK to prepare for our trip to South America. Our original plan to return via S America did not work. It was far cheaper to go all the way back to UK, then return to S America! 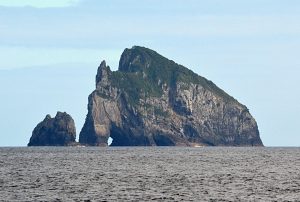 I have masses of photos of this trip, which are in the albums accessed from the buttons on the right. Maybe one day I shall assemble them imto a video 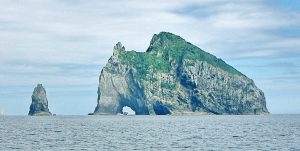 When we flew out, Clare and Iain had done a lot of work onTrue. We had a couple of weekends sailing together, then Dairne and I went off for 3 weeks on our own. 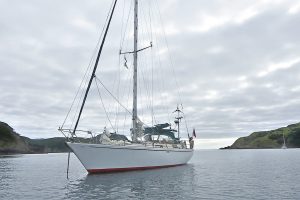 Our cruise took us northwards the the Bay of Islands and back again. In that time we managed to assist with quite a few issues including

(1) Identifying why the Aries self steering gear was not working. We had to modify a few bits after we got back, but it is now functioning perfectly 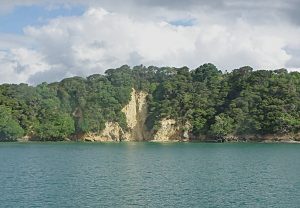 (2) Getting the SSB radio to work (I had done the Long Range Certificate course in UK before we left).  With some help from Russell Radio we had a lot of success, including getting Weatherfax data. We got weather from Wellington and Australia. It was great fun talking to Russell Radio each evening as we worked down the coast, and getting time signals from Hawaii.

(3) Initial experiments with Semco to improve the teak

All in all we had a great time. 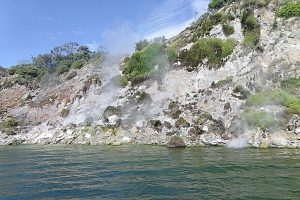 This time we had booked a business class package, which included some accommodation nights, so we made a tour southward  (including visiting friends in Rotorua) exploring Lake Tarawera, the site of a major volcanic explosion many years ago. 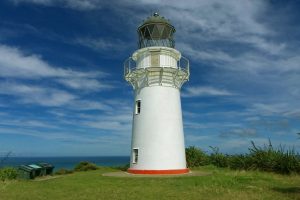 The crater left when the side of the mountain blew off is clearly visible 10 miles away. We then looped round to Hawkes Bay and out to East Head, which is at 178 degrees East, almost diametrically opposite Greenwich!

Finally we had a few days based in a motel near Keri Keri on the Bay of Islands, from which we were able to explore Ninety Mile Beach and Cape Reinga, the northern tip of New Zealand. All these trips added to our understanding of this beautiful country and its history. 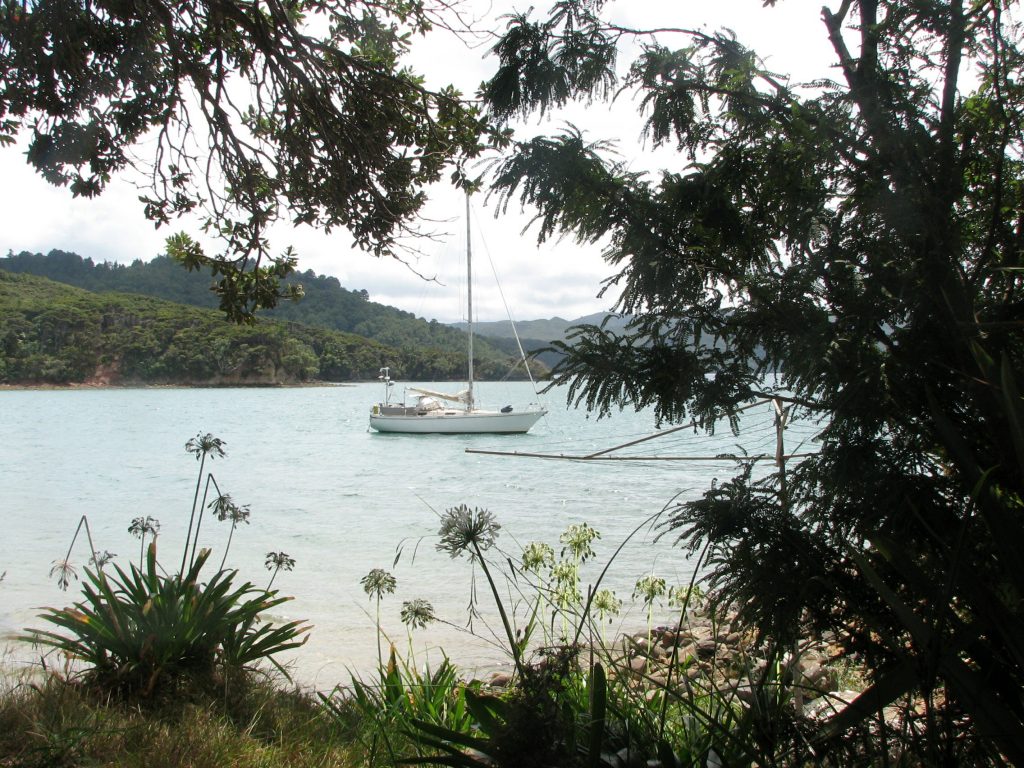 With some help from us, Iain and Clare had bought True, a 39ft cutter designed by Mick Orchard. Several had been built, but this was his own yacht. The previous owner was a helicopter pilot and True was well equipped, though much had been done in an incremental way. Most of the systems were there, but some needed updating, servicing or repair. 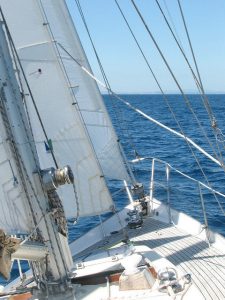 The main purpose of this trip was to get to know the boat.Iain had a long weekend so, despite some fairly rugged weather, we sailed the 50 miles to Great Barrier Island through the Thursday night. It was a good weekend trip, but a bit pressured.

The following weekend we looked after the grandchildren while Iain and Clare had their first weekend off from family duties. Great fun for all!

Then it was our turn. We took True away on our own for 10 days, going in slow stages via Coromandel to Great Barrier Island where we linked up with Dairne’s cousin, Tony in his launch Outrider. He gave us plenty of good advice, especially with regard to anchoring. 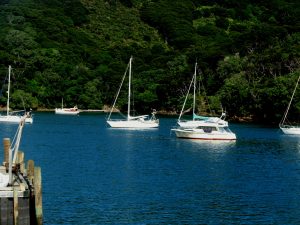 That night it blew 50 kts wiith a 180 degree wind shift in the small hours.

With the weather remaining unsettled, we wanted to get back, so we left Tony at Great Barrier. The wind direction forced us back to Coromandel, and then we worked our way back through the islands to the mooring at Panmure, the place we had identified two years earlier.

A bit more time with the family, then back to the UK.

And True? A superb boat for the family, and one which is capable of great things in the future.

(There is some quite good video of this trip, but it needs remaking before it can be published) 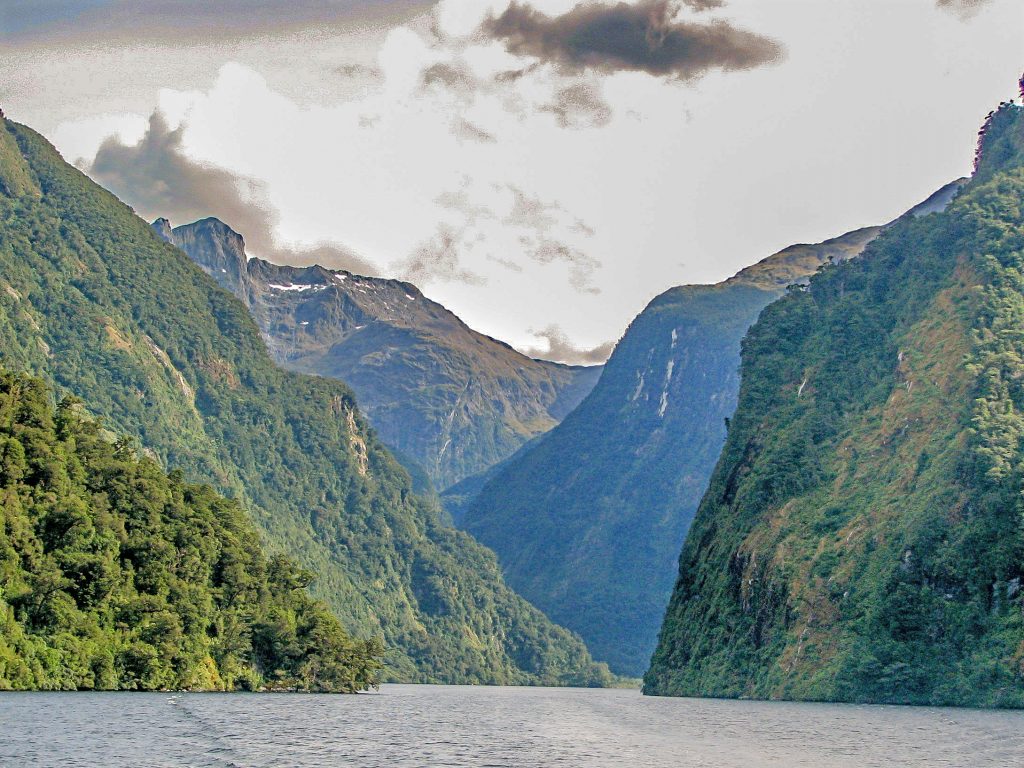 We had a week or so with the family in Auckland before heading south. During that time we identified Panmure as a suitable place for a mooring. Already, the idea of getting a boat in New Zealand was beginning to take root. 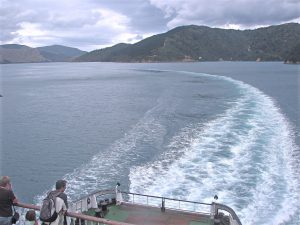 We  drove south, calling to see a friend in Taupo on the way, then making our way over the ferry to Picton, and down the west coast again. One of the highlights was a visit to the heronry not far from Whataroa, 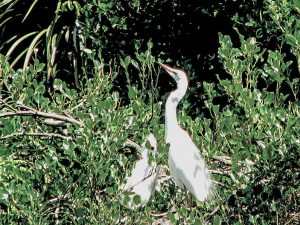 On past the glaciers, we went, for a second time,  across Lake Manapuri to Doubtful Sound 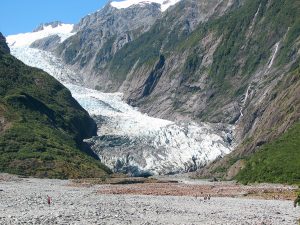 As hoped, the weather was considerably better. 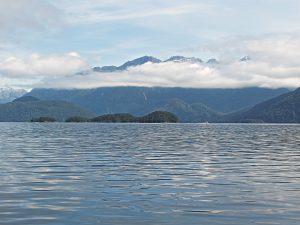 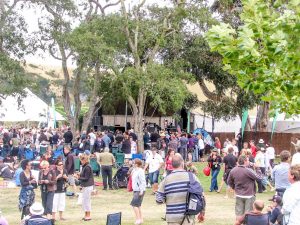 On the way back, we called in to the Blenheim Wine Festival and explored the local wineries.

On the way back up North Island we called in to see Dairne’s relatives, John and Kerryn in Rotarua.

We towed Iain’s 29er north to Whananaki where  we spent a week on a campsite with the family. They had a tent, and we had a chalet. It worked well

This time, we drove to Wellington, which meant going along the ‘desert road’ past Ruapehu, an active volcano in north island. We also visited Mt Egmont, also known as Taranaki before boarding the ferry from Wellington to Picton, an interesting passage up some of the Marlborough Sounds.

It was the Sounds we wanted to see, so we picked up another car in Picton, and made our way along the north coast of South Island, then out along 50 km of unsealed (i.e. gravel) roads to French Pass, one of the more fascinating spots in the Sounds.

After visiting an ex-ABP colleague in Nelson, a delightful town with a large marina, we toured the northern end of South Island before returning to Auckland.

We made a brief visit to see David in the Bay of Islands, and had a delightful day out on his launch Feather.

Then we had a week in a cottage in Algies Bay, near Warkworth in North Island for a beach holiday with the family. It was very hot, and the shade of the Pohutukawa trees behind the beach was essential. 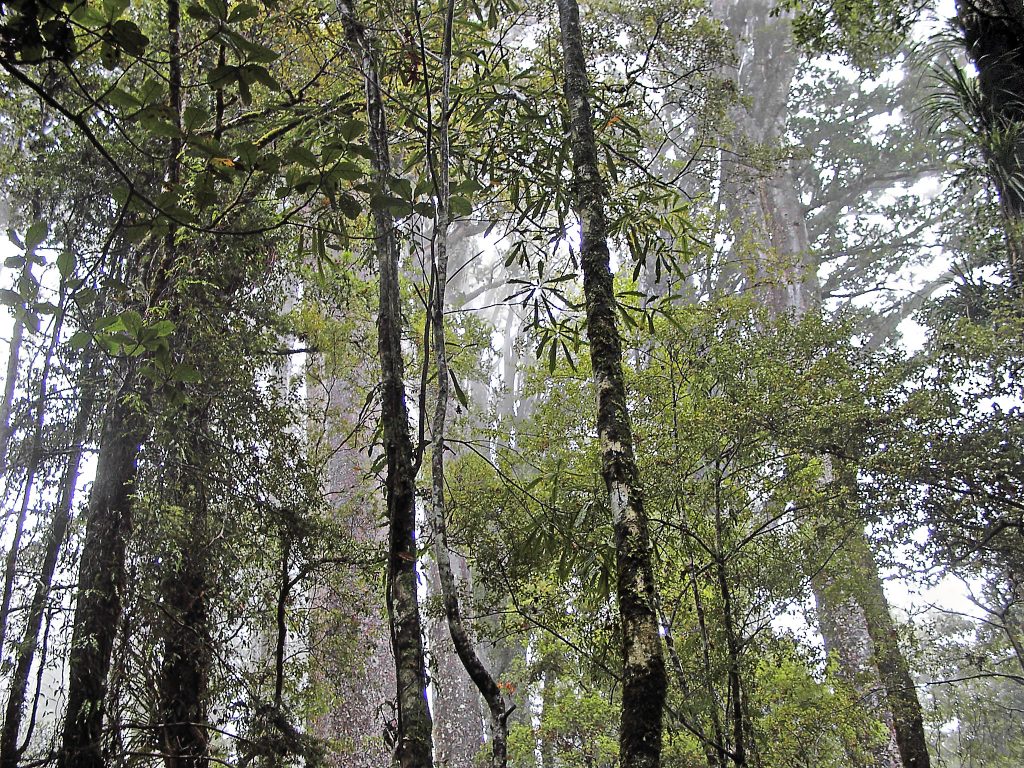 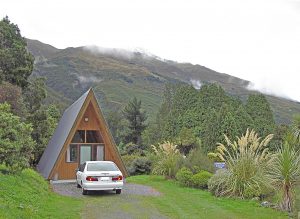 After her previous two visits to New Zealand, Dairne was very keen that I should see the country.  In 2002, we finally made it.  It was only a few months before the twins Harry and Alice were born.  We toured the country using a hire car and staying in motels.  We found booking in advance was hardly necessary. 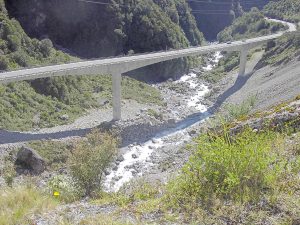 It was a hectic tourist trip. We flew down to Christchurch, picked up a hire car, drove down the west coast past the glaciers. 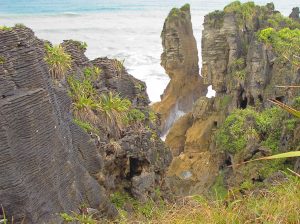 Then we visited Fjordland. It was raining (“APD”= absolutely pixxxxg down”),  but this meant the waterfalls were at their best. 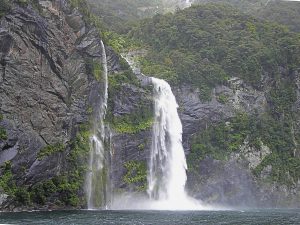 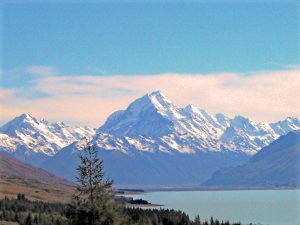 Then back up past Mt Cook.

Later we visited Coromandel, a beautiful part of the east coast of North Island. 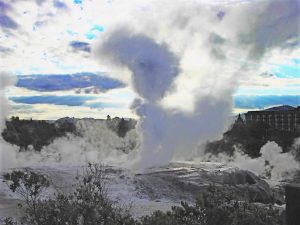 Other visits included a trip to Rotarua, the main thermal area. 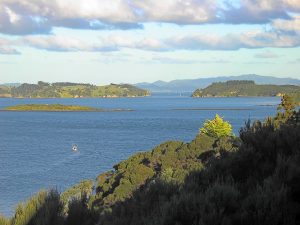 A trip north enabled us to visit Dairnes cousin in the Bay of islands. A lot was packed in!

Sadly there is no Log, video or presentation relating to this trip, but there  are some impressive photos in the flickr set including

–   the waterfalls in Milford Sound

–   Waitangi and Bay of Islands