In this section, clicking on an image will usually enlarge it

This note is a development on the web pages I published under the title “Zero Carbon Ship” . That note received some favourable comment, but the implication that the UK was lagging behind and not participating in international projects to find a solution to the Greenhouse Gas Issue was challenged by a good friend of mine, who happens to be a senior figure in the Institute of Marine Engineers. He has participated in discussion of these issues at IMO and with various UK government agencies.

I was politely ticked off by my friend for failing to find a wide range of published material on the UK efforts to respond to the Greenhouse Gas challenge. In my defence, I can point out that none of the programmes he identified popped up in any of my numerous Google searches when I was constructing the Zero Carbon Ship web pages. Clearly it is well kept secret!

Central to the argument is the “Clean Maritime Plan” which was published in July 2019. So, I did my penance , and read it from beginning to end. As such documents go, it is well prepared, beautifully presented, and comprehensive. It explores the options, and the practical problems of getting the research done and motivating industry to embark on the decarbonisation pathway. It seeks to embrace all the players, including shipowners, ports, potential fuel suppliers, banks, shipping services (such as insurance) and the creation of coordinating programmes. The complexity of the transition is illustrated by the diagram showing the technology and fuel options that need to be taken into account. 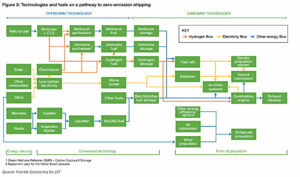 Of course, it is based on the IMO target that existed in 2019 of achieving 50% reduction in GHG emissions (compared to a 2008 base) by 2050 and zero emissions as quickly as possible thereafter. We now know the IMO goals have been trumped by their own parent body, the United Nations who, on the basis of the recent IPCC WG1 report have declared that the goal should be zero emissions by 2050. That is a very big ask.

Well, 2019 is a whole pandemic ago. How is the progress? Fortunately, as I write this, we are less than a week away from the annual London International Shipping Week (Sept 13th to 17th) It seems some items relating to decarbonisation will be raised, so it will be worth monitoring the public releases. Already some keynote themes have been put into the public domain, including a very interesting keynote address on decarbonisation

During the review of this section, the existence of a technical innovation forum was brought to my attention. It proved to be accessible as a zoom event organised by IMO and UNEP>

In the meantime, in the next few sections, I seek to identify what we might hope to hear from this event, and later in the year from the COP 26 conference in Glasgow

I do not propose a blow by blow analysis of the Clean Maritime Plan. The link is given at the head of section 1. The Plan clearly states a number of actions the government (or its agencies) will take, and gives dates. So that begs the question “Did they happen?”

For example, here is a statement from the Plan “The Clean Maritime Plan has also been informed by a programme of economic and technical research, available online”, against which is an endnote reference. Look that up to find “ [reference to be added to .gov.uk]”.I could not find the research, but that may not signify.

Early on reference is made to the Clean Air Strategy which was published earier in 2019. The report states that “Also in the CAS, Government committed to publish in 2019:
● A Call for Evidence to explore options for standardising environmental regulations for vessels operating domestically within the UK, including inland waterways.
● A consultation on options for extending the North Sea Emissions Control Area beyond its current geographical limits or establishing new, geographically distinct, Emissions Control Areas around the UK coast.
● Guidelines to advise ports on how to develop effective and targeted Air Quality Plans “

It seems that this did happen. There is a very comprehensive clean air plan published by the Port of Southampton that clearly derives from this action.

The importance placed on clean air by the local community is emphasised by the publication of a report by Southampton City Council of the relationship between pollution and the new 5th cruise terminal in Southampton, which does have a capability for providing shore power to cruise ships

The government has published its review for 2021. On page 16, there is a long list of actions that government is, or will be, taking in relation to decarbonisation. It looks like the publication of port clean air strategies is the only completed item to date. It is encouraging to see that the process has survived an election and pandemic!

There is a fascinating paragraph in the section on electrification that should be borne in mind by those who think that the ports (especially Southampton) should instantly provide shore power to all ships. It reads “ research commissioned by the Government estimates that UK ports are still likely to see total electricity demand increase significantly by 2050. Without any further policy intervention, this research estimates that the total annual electricity demand at UK ports could rise from 20 GWh in 2016 to around 250 GWh by around 2050, largely driven by the demand for shore power from container vessels. In contrast, under a scenario in which there are very ambitious assumptions about maritime electrification, this research estimates that annual electrical demand at UK major ports could rise to over 4000 GWh by around 2050, predominantly be driven by demand for electric propulsion, but with demand for shore-side power also expected to increase significantly.”

Hmmm. Sobering. (Especially when you add 5 cruise ships each the size of a small town into the Southampton mix!)

Despite my best endeavours, I can find no current reference to MERAS. It may be faulty searching by me. It could also be that the body has been renamed, or a new approach developed making it unnecessary. It would be interesting to know, because some of the new technologies do not easily map onto existing regulatory structures.

Page 47 of the report lists 6 actions to be completed by end 2019, and a further 5 to be completed before end 2020. It would be surprising if COVID19 has not disrupted this programme, but it would be interesting to learn where we have got to.

So it looks like the government has managed to keep broadly to its timetable, though concrete achievements are rather limited to date.

My good friend also provided me with links to some other ‘actors’ in this drama that could be considered significant. They are worth exploring.

The International Chamber of Shipping represents shipowners worldwide and it has views on the subject.

As does the British Chamber of Shipping which is arranging a conference for 16 September.

As my friend and adviser said “I could go on and on but as you can see there are many players in this field; probably hundreds around the world, if you count the universities. My own Institute (Institute of Marine Engineering) has a special interest group dispersing information and developing policy on ship air emissions. All are competing to make their voices heard, influence IMO and the regulation developers, be they national or international governments, and attract funding.”

In terms of specific commitments, Government has done quite well, especially within the constraints imposed by COVID 19. The most noticeable omission seems to be the creation of MERAS, which has yet to happen. The original report seemed to place a great deal of importance on this regulatory advisory service. This could suggest that there is still some uncertainty about choice on replacement fuels, and slow progress on agreeing international standards.

The situation is not helped by the lack of a clear voice from the shipping industry itself.

Although there are no clear winners in the replacement fuel race, the general direction towards hydrogen based fuels is becoming clear, with smaller roles for biomass derivatives, and alternative energy sources such as wind and solar having important niche roles. The new fuels will be used in modified conventional engines until high powered fuel cells are developed which will operate at higher efficiency. But shipping is an international industry and no country or corporate organisation can afford to strike out alone as this could incur transition costs that may not apply to other competitors. It looks as though IMO has to deliver

The report mentions in several places the role of government in advising and steering IMO, and there are no specific targets in this area. Industry and government both require significant progress from IMO. This is a crucial area, considered in the next section

Many lesser developed countries simply lack the capability and resources to comply with any of the changes in shipping demanded by the climate change targets. Moreover, the developed world has to accept that its industrial development has in large part created the climate change issue.

Meanwhile, it is becoming increasingly clear that the shipping community has accepted that change must occur, and many large shipping companies have already started investing in interim technologies such as LNG and will start investing in new technology as soon as the regulatory environment is likely to produce a level playing field during the inevitable transition. If they have to wait for the usual ponderous IMO procedures to work through then even the old IMO target of 50% reduction in GHG by 2050 will not be achievable. The newer UN target of close to 100% reduction in GHG by 2050 cannot happen.

Two things have to happen to change that outcome

If that cannot be done, then maybe the G7 countries can persuade China and Russia to introduce a regulatory regime that will allow progress to be made in the production, distribution and application of new fuels on shipping routes involving the G7+ group of countries. It would be a difficult and desperate step.

Reference has already been made to the increase in demand for renewable electricity. Somewhere there is a need for prioritisation. For example , some ships may be able to run on biomass derived fuels, but such fuels may be particularly suitable for certain classes of long haul goods vehicles. Shipping will have to compete for its share.

With significant container, tanker and cruise ship trades, the port of Southampton will need to compete hard to attract sufficient electrical supply against competition from numerous other land based demands for electricity (including heat pumps for homes, and electric cars)

The report does make a strong point of the importance of the City of London in ship finance, so the government’s argument that the UK may be in a position to influence investment priorities may have some weight.The banking industry (or at least some banks) and investment in shipping is tied up with shipping decarbonisation through the Poseidon initiative. It would probably be stronger if more banks signed up to the Poseidon Initiative.

Coordinating the transition of energy use in ships with the development of facilities for the creation and distribution of new fuels looks a difficult task. It is recognised in the report, but no clear actions have emerged so far.

My good friend summed it up by saying “If you look at the big picture we really need the public to hold our politicians to account and demand change and that the government manages it sensibly and equitably based on the science. In the UK having a change of minister every few years does not help. The shipping minister is a junior post in the Ministry of Transport and seems to be just a stepping stone to greater things, rather than a key role..All in all a real challenge.”

There is not much more that can be done, but unless the international processes are rapidly improved, it is unlikely that we will get close to zero carbon in shipping by 2050.